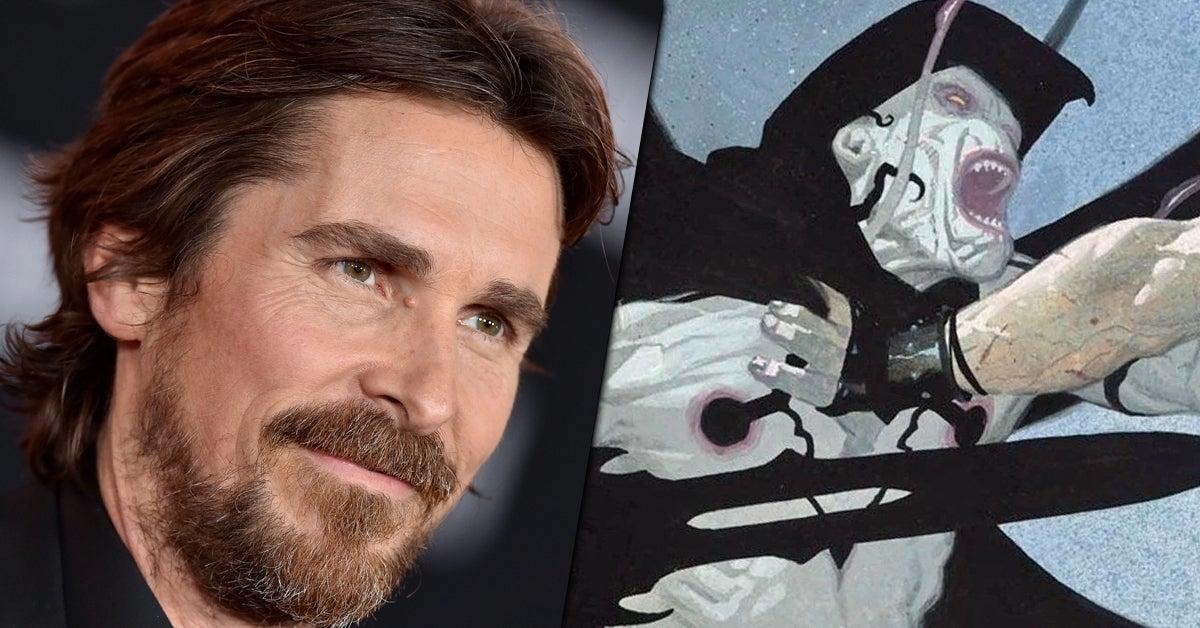 Marvel Studios released the first teaser trailer for Thor: Love and Thunder and it was full of surprises. The teaser trailer revealed some major things about the sequel including what Thor has been up to in the Marvel Cinematic Universe’s Phase Four, as well as our first look at Natalie Portman as Jane Foster / Mighty Thor. The one thing that was not revealed during the teaser was how Christian Bale’s villain Gorr the God Butcher could look in the film. There have been toys and some promotional art that gave us our first look at the character, but we have yet to see the villain in love-action. If a new report is to be believed, Bale is going to look terrifying as the character.

During a recent episode of The John Campea Show, industry insiders John Campea, Roger Meyer Burnett and Erin Cummings reveal that they have each seen footage of Bale as Gorr the God Butcher. Campea calls the footage of Gorr a “thing right out of nightmares” and “straight up freaky” while Cummings says “it is absolutely terrifying”. Their descriptions are sure to excite any Marvel fan and I’m sure it will get people excited to see the next look at the film.

Gorr the God-Butcher was created by Jason Aaron and Esad Ribic in their Thor: God of Thunder series for Marvel Comics in 2012. That series kicked off Aaron’s years-long run writing Thor comics. Taika Waititi used their story for Thor: Love and Thunder’s plot. Recently, fans were concerned about the villains look in the film which led Aaron to speak out in a comment on his substack newsletter.

“We haven’t even gotten the first official look at the movie version of Gorr the God Butcher yet,” Aaron said. “I’ve seen some concerns online about Gorr’s design, based off glimpses of the character’s action figure. As the guy who co-created him, along with Esad, I’ll just say that it was not Gorr’s nose (or lack thereof ) that made him the tragic and deeply disturbed God Butcher that he was. Trust in the face of Christian Bale. Need I remind you, it’s a pretty goddamn talented face. “

Marvel Studios describes Thor: Love and Thunder as follows: “The film finds Thor (Chris Hemsworth) on a journey unlike anything he’s ever faced – a quest for inner peace. But his retirement is interrupted by a galactic killer known as Gorr the God Butcher (Christian Bale), who seeks the extinction of the gods. To combat the threat, Thor enlists the help of King Valkyrie (Tessa Thompson), Korg (Taika Waititi) and ex-girlfriend Jane Foster (Natalie Portman), who – to Thor’s surprise – inexplicably wields his magical hammer, Mjolnir, as the Mighty Thor. Together, they embark upon a harrowing cosmic adventure to uncover the mystery of the God Butcher’s vengeance and stop him before it’s too late. “

The film is being directed by Waititi and will star Chris Hemsworth as the titular character, Tessa Thompson as Valkyrie, Natalie Portman as Jane Foster / Mighty Thor, Russell Crowe as Zeus, Jaimie Alexander as Lady Sif, Chris Pratt as Peter Quill / Star Lord , Sean Gunn as Kraglin, Dave Bautista as Drax the Destroyer, Karen Gillan as Nebula and Christian Bale as Gorr the God Butcher. In addition to directing, Waititi will also be reprising his role as Korg. Thor: Love and Thunder hits theaters on July 8th 2022!

Are you excited to see what Christian Bale looks like as Gorr the God Butcher? Let us know in the comments below or by hitting up our writer @NateBrail on Twitter!