DJI has just introduced a new drone – its most capable ever to squeak under the 250 gram limit that keeps operators free from a whole host of headaches and restrictions for flight (note that local laws and rules still do apply – being small does not mean you can do anything you want). The DJI Mini 3 Pro drone is the first in the series to add that “Pro” moniker, and it does a lot to earn it, making this the best overall value yet in the consumer / enthusiast drone space for people who want portability, affordability and image / video quality.

The DJI Mini 3 Pro is still small enough to earn its name, but it is a bit larger than prior iterations. While the drone’s weight comes in at 249 grams with the included standard battery pack, the wingspan in particular is a lot larger than the original Mini, in particular, when the arms are extended for flight. This provides additional flight control capabilities, and it only barely changes the drone’s profile when it’s folded for carry, so it’s definitely a welcome design trade-off.

DJI has not only refined the aerial engineering here, they’ve also packed an impressive gimballed 1 / 1.3 inch sensor camera in the Mini 3 Pro, which can capture images at up to 48 MP in RAW format, and record video in 4K at up to 60 fps, with a slow-mo mode that captures 120 fps footage at full HD (1080p) resolution. 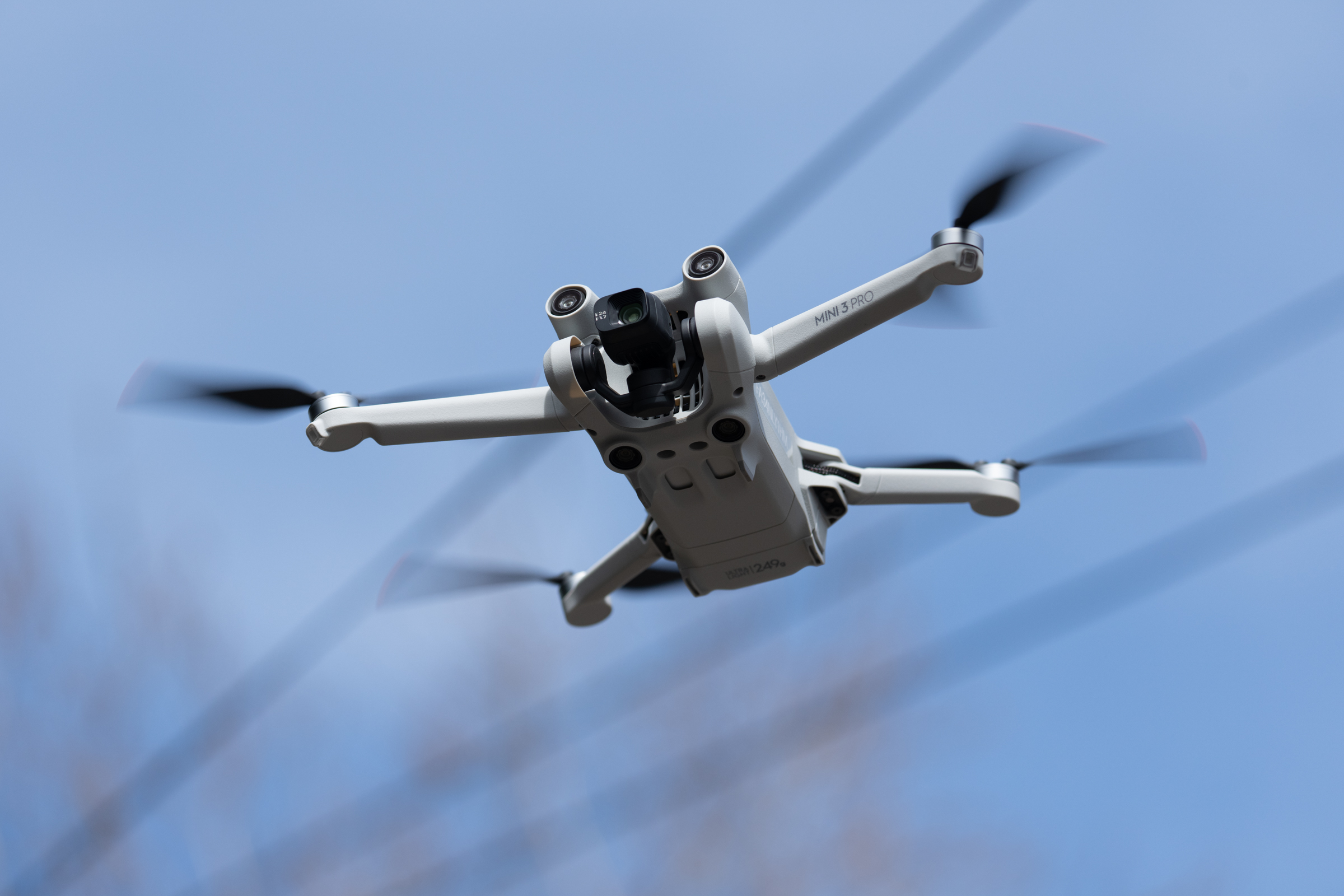 The “Pro” also comes into play with the formats that the Mini 3 Pro offers: You can record video in D-Cinelike mode, which offers a wealth of color information for tuning the color mix of your video to your liking afterwards in programs like DaVinci Resolve. This can give you a cinematic look that is frankly astounding when you consider it’s coming for a drone that slips pretty easily into a jacket pocket.

Another “Pro” feature that DJI has introduced to this size category for the first time: obstacle detection and avoidance. The Mini 3 Pro gets the company’s Advanced Pilot Assistance Systems 4.0, meaning you’re far less likely to have to scale a tree to retrieve it because it got caught up in some branches.

Other features include the ability to pivot the camera via the gimbal to shoot vertical video, making this the ideal TikTok drone, subject tracking, 4x digital zoom (which unlocks some creative video shooting capabilities), panorama shooting and 34 minutes of run time on the standard battery (plus 47 minutes possible on the extended juice of the optional Flight Battery Plus – which also tips you over that 250 gram limit, I should note).

At first glance, the Mini 3 Pro does not deviate much from DJI’s tried-and-tested approach to drone design; it’s a four-rotor aircraft, mostly made up of that central body, with extendable arms and integrated stubby landing gear. There are some big obvious changes versus prior Minis, however, including at the front of the drone, where the usual bulbous overhang that covers the camera makes way for a scooped out, “hammerhead” -like look with the orientation cameras flanking the gimballed 24 mm-equivalent, f / 1.7 camera below. 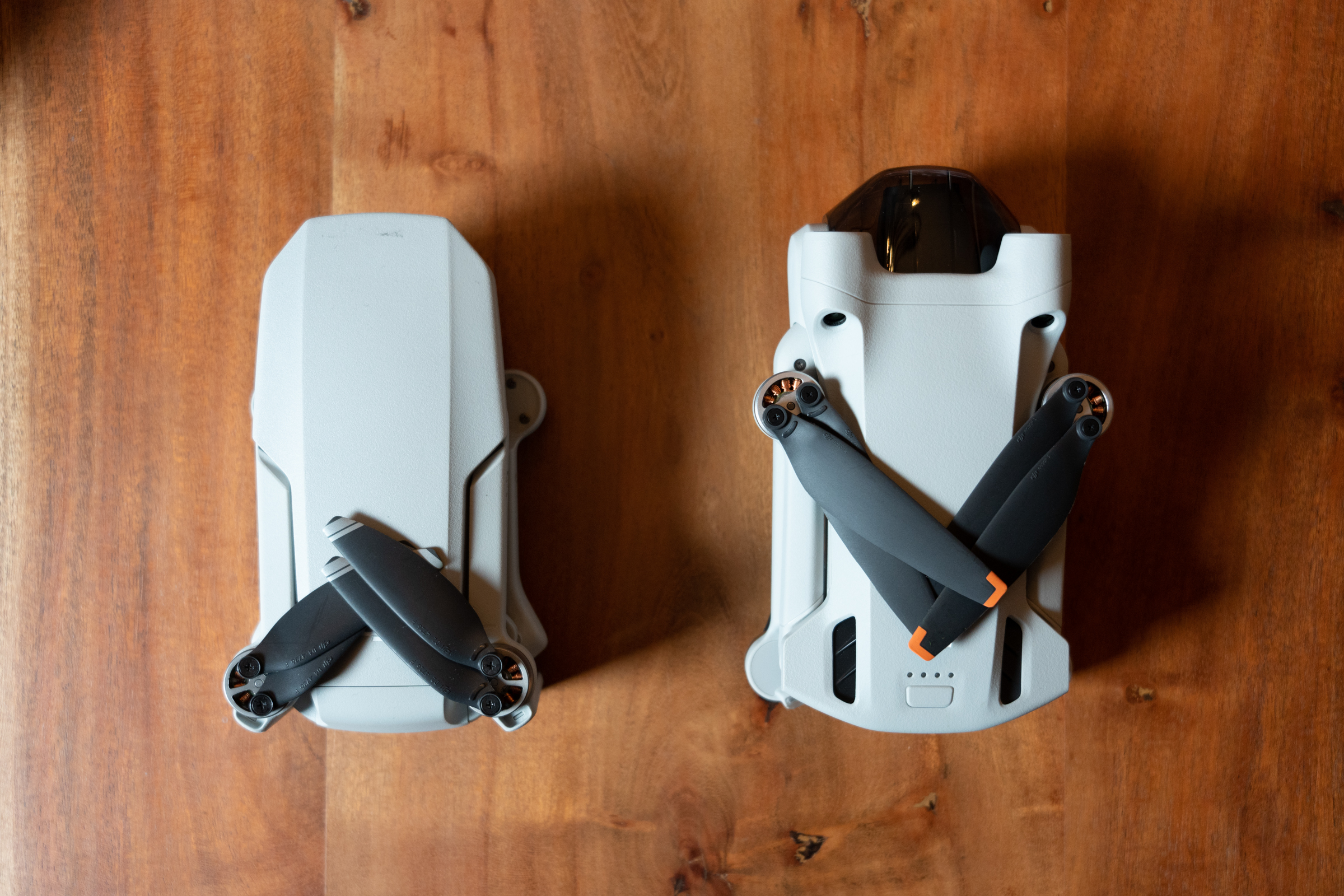 This probably helps eke out weight savings to allow the Mini 3 Pro to boast its impressive specs while still staying on the fair side of those aviation rule restrictions. It also means the drone ships with a larger, more bulbous protective hood attachment to keep the gimbal and camera safe and stable in transit. This was my one knock on the drone’s design – the gimbal is loose when the drone is powered down, which is understandable to protect the motors, but it means you have to fight it to a certain extent to get it to line up correctly with the protective hood before it clips in. 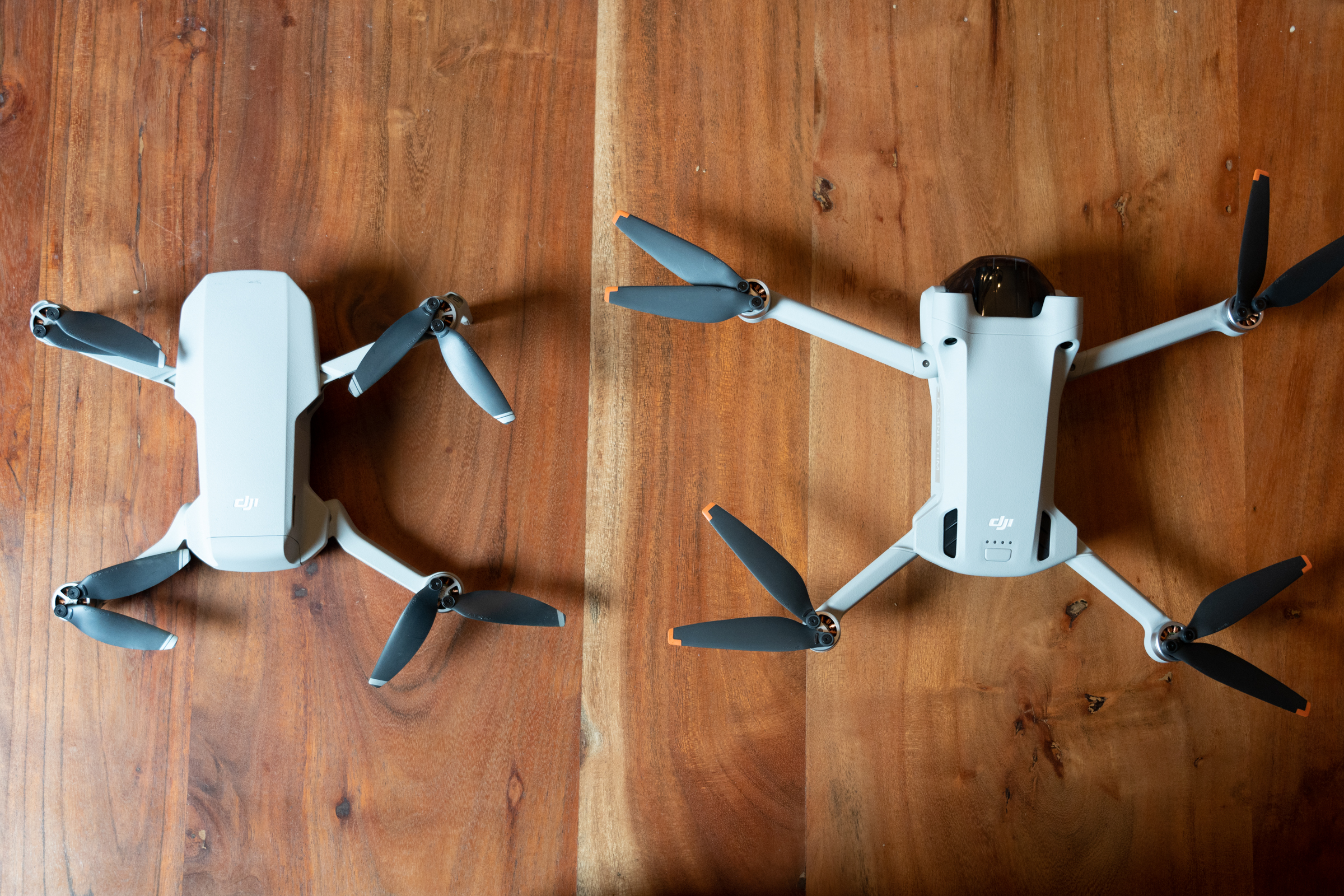 DJI has obviously learned a lot from years of trying to make the most of the sub-250 gram drone category, however, and it really shows in the Mini 3 Pro. The rotors do not have the easy removal clips that come on larger models, but once again this is a worthwhile trade-off. For a few minor inconveniences, what you get is a drone that does not require a major packing logistics operation to take along with you – and one that captures images and videos of a quality that will not leave anyone but the most demanding pro users feeling like they should’ve brought along a beefier machine.

A note here on the controller options – the Mini 3 Pro comes with the RC-N1 controller by default (though there’s a controller-less option as well to save a few bucks if you already have one), which is a great controller in its own right, but which requires you to supply the viewfinder in the form of your connected smartphone. The DJI RC package comes with that brand new controller as well, and if you’re on the fence, you should absolutely go for that one: The DJI RC has a built-in display, and essentially runs an integrated Android phone to operate the DJI Fly app. It’s a very compact and well-designed device, with excellent display quality and so many fewer headaches when it comes to fiddling with hardware smartphone connectors. More about the DJI RC in the next section.

I’ve already alluded to the quality of the DJI Mini 3 Pro’s image and video capture a few times, but in case it was not clear: This thing more than delivers.

The 48 megapixel images offer new levels of detail and printing options, and the RAW capture means you can really get a lot more out of your still captures when editing after the fact in programs like Lightroom. Images are also much less noisy than they have been from prior iterations of the Mini, owing to the larger sensor and the larger pixel size on the sensor itself. Low-light capture has never been a particular strength of these drones, but DJI has done a good job of prioritizing improvements in that area on the Mini 3 Pro, and it shows. 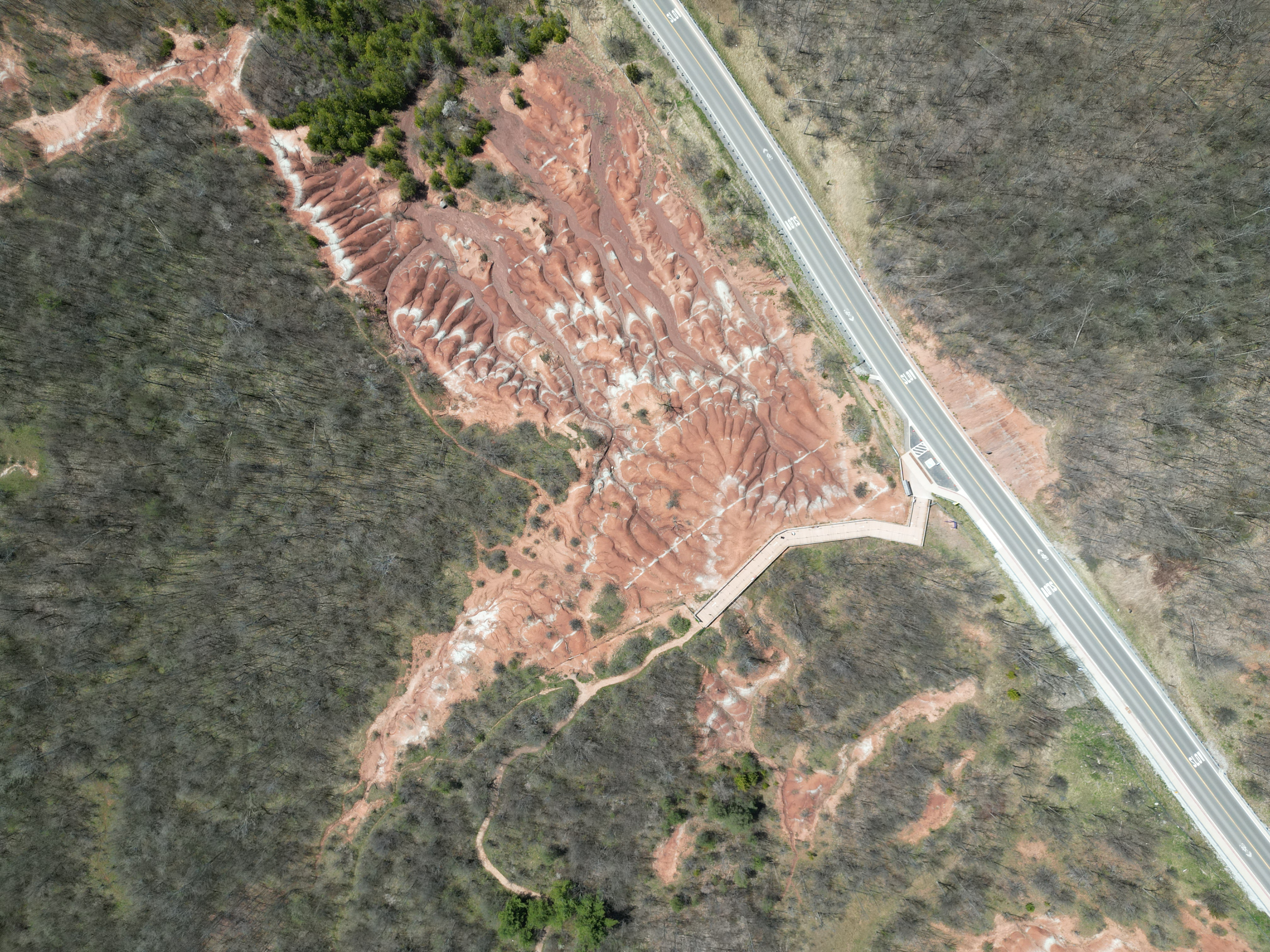 Auto mode delivers images that really impress, and for most users there’s probably not much reason to delve into manual mode. But for advanced enthusiasts and pros, the manual modes offers the ability to tweak to your heart’s content, which can result in some truly unique captures that stand out from the crowd. Custom image modes including the panorama feature are excellent for unique applications like large-scale prints, and the Mini 3 Pro software actually makes getting good ones a relative breeze.

Speaking of breeze, when it comes to flight control, the Mini 3 Pro seemed to have no problem handling wind with aplomb. One thing I noticed quite a bit on my own OG DJI Mavic Mini was that it was frequently complaining about wind speeds and stability as a result; the Mini 3 Pro, even at altitudes above 400 feet, never gave any indication it was struggling with that particular issue. The days I flew were relatively calm at ground level, so your mileage may vary, but it’s definitely improved versus previous generation hardware. 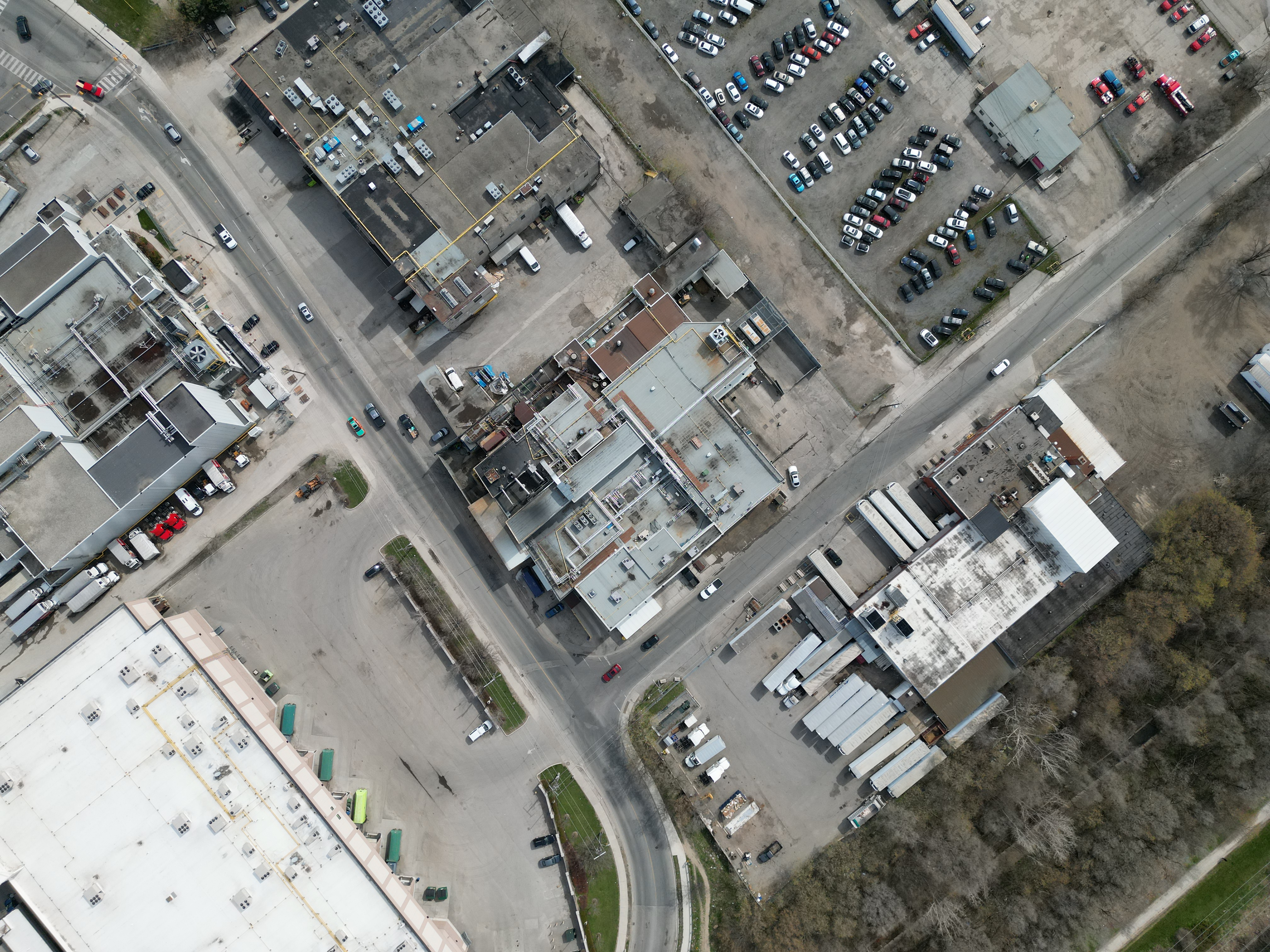 As much as the DJI Mini 3 Pro is optimized for stills capture, the new video options are a major upgrade versus what this category could previously do. 4K / 60, HDR, full HD 120 fps slow-mo, vertical video and the D-Cinelike color profile all add up to a drone that can do it all, whether you’re an amateur filmmaker trying to make the next art-house classic, a YouTuber who puts a premium on production value, or a TikTok creator who wants to add another dimension to their content. Subject tracking works reliably well, and combined with vertical video and modes like the “dronie” aerial selfie capture option, you can dive into a lot of creative options for novel posts on any platform.

As for actually flying the drone, it’s a bit hard to evaluate from the perspective of a newcomer since I’ve now been flying DJI aircraft since the original Mavic. But it definitely feels intuitive and simple, with the added bonus that the obstacle avoidance protections do kick in when large objects get in your way, potentially saving you from an expensive accident.

You can tweak settings like how fast the camera tracks in order to refine the end product and compensate for inexpert or jerky joystick movements, but out of the box the DJI Mini 3 Pro seems tuned to produce good end results for a wide range of users.

As mentioned, the DJI RC controller option also really ups the game in terms of the actual experience of flying the drone. My main headache with DJI drones in the past has been the less-than-elegant experience of connecting a smartphone to the controller, getting everything working properly and settled into the grip optimally. The DJI RC changes that into a truly seamless “it just works” experience, and you can connect the controller to any WiFi network (including tethering to your phone in the field) to keep both it and the aircraft up to date with firmware and flight restriction maps. Image quality and live video feed are high-res and excellent, viewable even in direct sunlight, and it’s absolutely not something you can give up once you experience it.

Along with a boost in performance, DJI’s latest Mini drone also got a fairly significant bump in price: The DJI Mini 3 Pro starts at $ 669, and that’s without a remote control. $ 759 will get you the Mini 3 Pro and the RC-N1 (which requires you to bring your own phone). The best option is of course the most expensive one, but I do think it’s the one most people should consider – that’s the DJI Mini 3 Pro plus the DJI RC for $ 909. As reviewed, my unit also included the DJI Mini 3 Pro Fly More Kit, which provides two more 34-min batteries, a hub to charge all three batteries at once, extra propellers and a handy shoulder bag that perfectly fits the drone, controller and everything I just mentioned, which is an added $ 189. 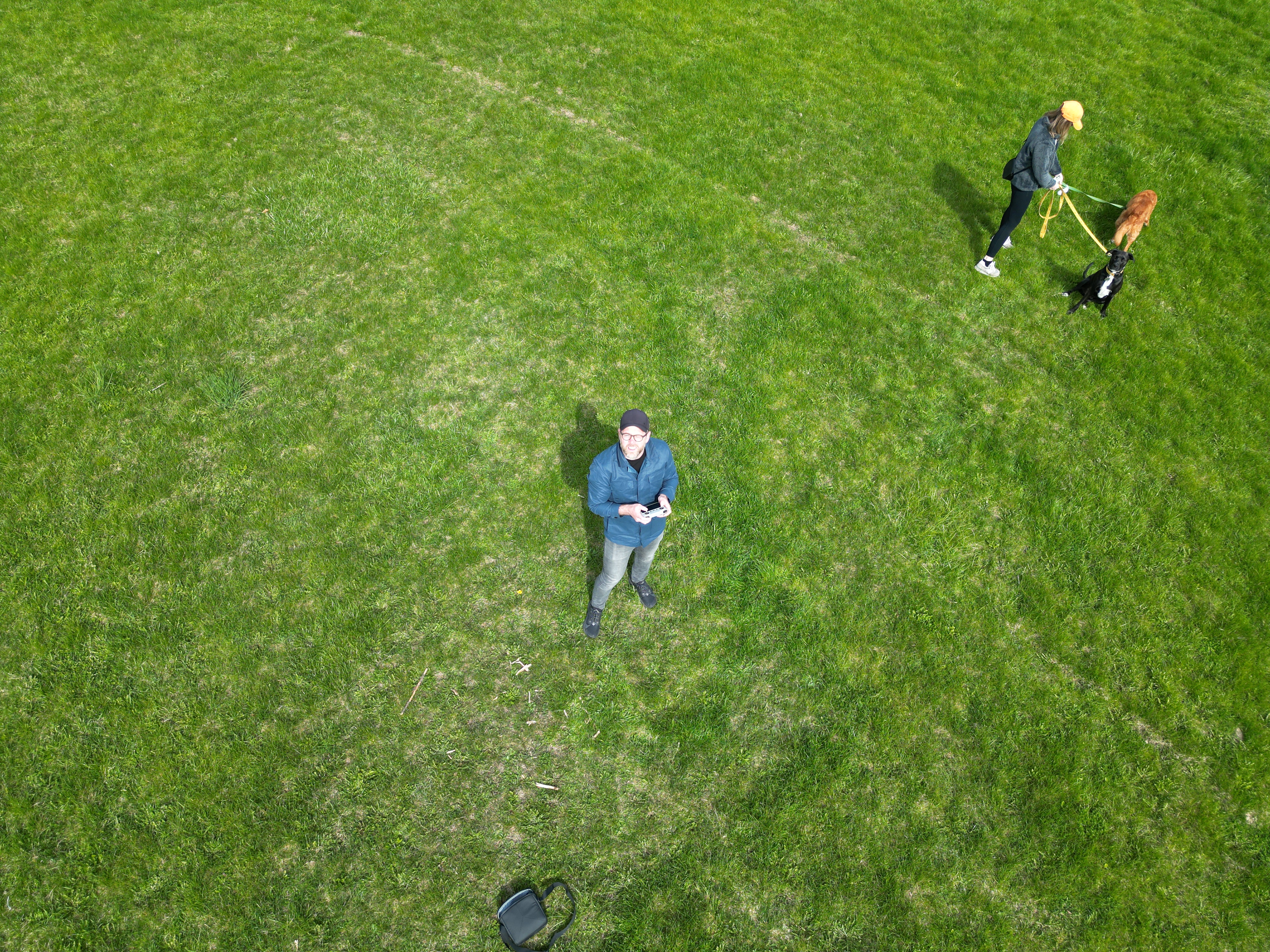 All told, the DJI Mini 3 Pro kit I reviewed costs a total of around $ 1,100 – nearly double the price of the DJI Mini 2 Fly More combo, which still retails for $ 599. But for what you get, particularly with the improvements to image and video quality, as well as the inclusion of the obstacle avoidance system, that’s well worth the price delta. Ultimately, the Mini 3 Pro is probably better compared to something like the DJI Air 2S, which costs $ 1,299 for the Fly More combo. With that option, you do get a larger sensor and better, 5.2K video recording, but most users probably will not appreciate the differences there, and the Mini 3 Pro still manages to sneak under that critical 250 g limit, which the Air 2S does not.

DJI’s pace of innovation means it can be tough to decide when to jump on as a consumer (I myself have three of my own prior generation drones, including the original Mini). But what it’s put together in the Mini 3 Pro seems like a package that has so few compromises it should satisfy even the most discerning enthusiast for years to come.