Prime Minister Naftali Bennett traveled to Moscow on Saturday for a meeting with Russian President Vladimir Putin to discuss the war in Ukraine.

The meeting at the Kremlin lasted for 3 hours.

Kremlin spokesman Dmitry Peskov said the two discussed “the situation around Ukraine,” according to Russian news agencies. The statement from the Prime Minister’s Office did not mention Ukraine or Russia’s invasion of the country.

An Israeli official diplomatic source said the meeting was coordinated with the United States, Germany, and France, “in continuous dialogue with Ukraine.”

The source said Bennett spoke with Putin about “the situation of Israelis and the Jewish communities as a result of the conflict” and the ongoing talks in Vienna to restore the 2015 Iran nuclear deal, which Russia is a signatory to.

“The prime minister expressed the position of Israel, which is opposed to a return to the nuclear deal,” the source said.

Earlier Saturday, Russia said it would demand guarantees from the US before backing the Iran nuclear deal, citing the current wave of Western sanctions against Russia. 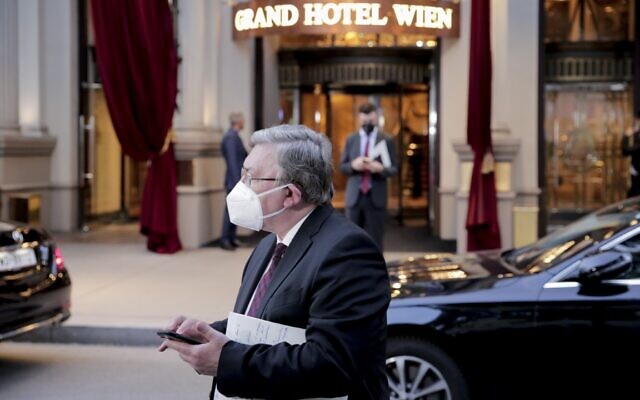 Bennett’s office said the premier was accompanied by Housing Minister Ze’ev Elkin, acting as a translator and advisor. Elkin, a Russian speaker and native of Ukraine, served a similar role under former Prime Minister Benjamin Netanyahu.

Bennett, Israel’s first Orthodox premier, made the flight to Moscow on Shabbat, which observant Jews are barred from doing under Jewish law, though exceptions are made for medical or security situations in which life is threatened. Elkin is also religious.

Following the meeting with Putin, the Prime Minister’s Office said Bennet spoke with Ukraine’s President Volodymyr Zelensky. It did not specify what the two discussed.

Bennett’s office said that from Moscow, the prime minister was flying to Berlin to meet with German Chancellor Olaf Scholz before returning to Israel.

The premier’s spokesman did not say what the two would discuss; Germany is a party to the Iran nuclear deal and has also called for an end to Russia’s invasion, while moving to provide Ukraine with some military aid. Scholz was in Israel on Wednesday for a visit. 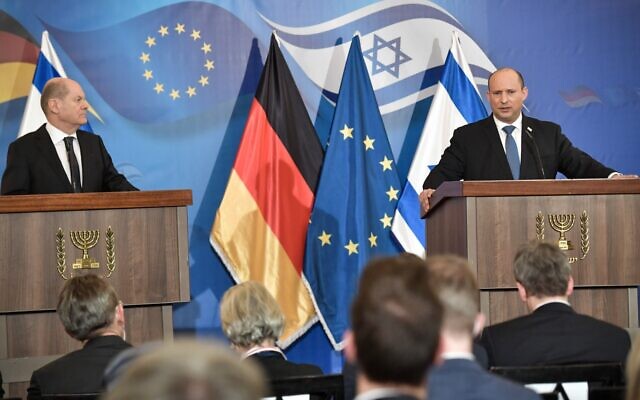 The trips to Moscow and Berlin came after Bennett held two back-to-back phone calls with Putin and Zelensky in recent days, as Moscow pressed on with the invasion of its neighbor. 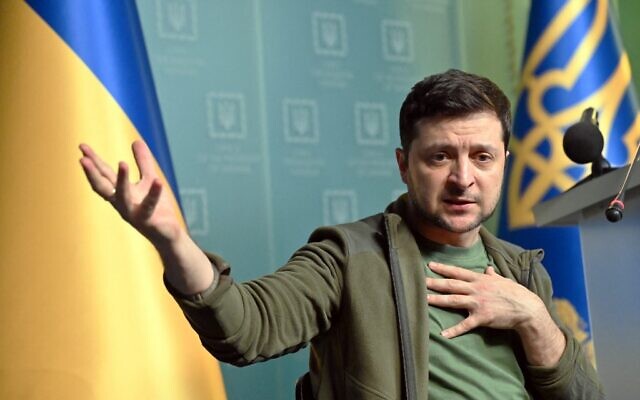 Ukrainian President Volodymyr Zelensky gestures as he speaks during a press conference in Kyiv, on March 3, 2022 (Sergei Supinsky / AFP)

Israel has sought an elusive middle ground in the conflict: siding with its Western allies while avoiding a rift with Moscow. Russian forces control the airspace in neighboring Syria, where Israeli planes often operate against militias affiliated with Iran; Israel sees Iran as an existential threat.

Israel has offered on several occasions to mediate talks to end the invasion. Ukrainian officials have also said they support the idea, but the initiative has not yet gone any further.

On Tuesday, Bennett said that Israel was seeking to “help quietly” while maintaining its own strategic interests. Israel has expressed its support for the Ukrainian people and has sent a shipment of 100 tons of humanitarian aid. Foreign Minister Yair Lapid condemned the invasion as a “breach of the international order.”

But Bennett has avoided calling out Putin by name, refused Ukrainian requests for military equipment, and vowed to stake out a cautious policy.

“From the beginning, the State of Israel has taken a measured and responsible approach, which allows us not only to protect our interests but also to be useful, to be a reliable player – one of the few that can communicate directly with both parties – and assist as required, ”Bennett said in a Tuesday speech.

Russia and Ukraine are expected to hold a third round of talks to end hostilities on Monday, Ukrainian negotiator David Arakhamiya said in a Saturday Facebook post, without providing further details.

The first two rounds of talks on resolving the Russia-Ukraine war were produced no breakthrough, though the two sides agreed to meet again.