In some cases, the suspected investigators said they were aware that Namdar may have been an Iranian intelligence service, but continued their communication with him anyway, according to the security service. The five suspects – four women and one man – are all Jewish immigrants from Iran or descendants of Iranian immigrants. Their names were barred from publication under a court-issued gag order requested by their attorneys.

According to Shin Bet, the suspects took photographs of strategically important sites in Israel, including the US Consulate in Tel Aviv; tried to form relationships with politicians; provided information on security arrangements at various locations; and committed other offenses – all at the behest of the Iranian operator, who went by the name of Rambod Namdar, in exchange for thousands of dollars.

Two of the suspects also tried to convince their sons to join an IDF Military Intelligence unit, Shin Bet said.

However, as none of the suspects allegedly involved in the case had access to substantially classified material, there was no indication that this espionage seriously compromised national security. However, it revealed a potentially weak point that could be used by Iran in the future.

“I urge the citizens of Israel to be vigilant about these attempts. It may be that the people behind the information you are consuming or sharing on the networks are Iranians,” Prime Minister Naftali Bennett said on Wednesday in response to the news of the case. there can be no doubt – the long arm of the defense will reach anyone who tries to harm Israel’s security. ”

The investigation and the ensuing accusations shed light on the rare and little-publicized phenomenon of Jews from Iran traveling to Israel to visit family. In one case, such a trip – by one of the suspects’ nieces – was used to transport money from Iran to Israel to pay the Israelis working for Namdar, according to the indictment. 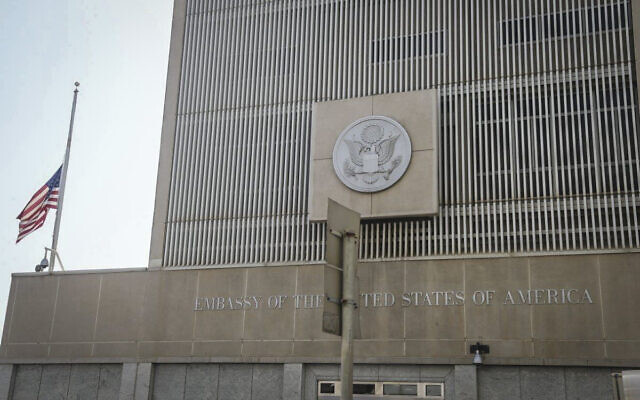 Namdar, who maintained profiles on Facebook, Instagram and WhatsApp, posed as a Jew in conversations with some of the suspects.

“With their serious actions, those involved endangered themselves, their families and innocent Israeli citizens when their information was transferred to Iranian intelligence, in addition to the information provided about Israeli sites and US sites in Israel, which were used for terrorist purposes. , ”A senior Shin Bet official said in a statement Wednesday.

The five suspects have been indicted in the Jerusalem District Court over the past month.

Two of the suspects were a man and a woman in their 40s who lived in the Tel Aviv suburb of Holon. According to Shin Bet, the wife, who worked as a presenter at a radio station – whose name is also excluded from publication under the gag order – was in contact with Namdar for several years.

Following Namdar’s instructions, the wife allegedly took photographs of the US Consulate in Tel Aviv and the Interior Ministry offices in Holon and of the National Insurance Institute. She is also accused of sending Namdar details about the security arrangements at a shopping mall in Holon.

However, she declined a number of his requests, including giving him the e-mail address of then-Prime Minister Benjamin Netanyahu and the telephone number of Israeli Defense Minister Aviv Kohavi; to take pictures of Mossad’s headquarters and various military bases; and filming inside the Knesset and Supreme Court, according to the indictment.

During this time, Namdar also repeatedly asked her for nude photos of herself, which she refused to send him and which eventually caused her to block his number on her phone, prosecutors said.

The woman also tried to convince her son to enlist in the military intelligence service.

Her husband is accused of having knowledge of her connection with Namdar and of having even spoken to the Iranian operator, as well as having transported her to the US consulate to take pictures of it, despite “suspicion that this was an Iranian intelligence officer “. Shin Bet said. 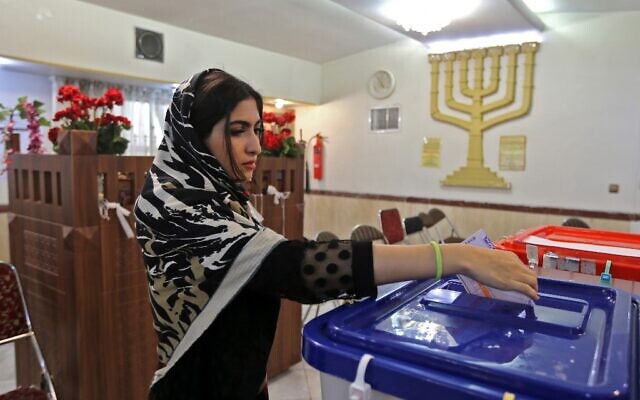 Illustrative: A Jewish Iranian woman casts her ballot at a polling station in the capital Tehran on February 21, 2020. (ATTA KENARE / AFP)

Another suspect, a 57-year-old woman from Beit Shemesh, is accused of performing a series of tasks for Namdar in exchange for $ 5,000. According to Shin Bet, she tried to become close friends with a female Knesset member on his instructions and sent him information about their relationship, including recordings of their communications. The MP’s name was excluded from publication.

She also tried to convince her son to join Military Intelligence and sent photographs and videos of his recording and military documentation to Namdar, according to Shin Bet.

The security service said she also formed a club for Iranian emigrants in Beit Shemesh, took pictures of her ballot box during the March 2020 election and tried to photograph the US embassy in Jerusalem, but was stopped by security guards before she could.

According to the indictment, Namdar also ordered her to install a hidden camera in a massage parlor in her home, apparently to collect potentially embarrassing footage that could be used as leverage over her clients. She installed the camera and recorded one of her clients, but eventually stopped the camera as it made a noise and deleted the video.

She also bought electronics and opened a store at Namdar’s request. According to the indictment, the Iranian operator also tried to get the woman to download cryptocurrency software on her phone so he could transfer her money, but the woman’s nephew, whom she asked to install the applications, told her it was too complicated and that she should not do that.

According to the indictment, the woman knew Rambod was working for the Iranian authorities and intelligence services, but agreed to help him anyway. For this she allegedly received $ 5,000 from him, some of which she received from a messenger sent by Rambod to Turkey, where she had traveled to meet him.

She was charged with contacting a foreign agent and transmitting information that might be of value to the enemy.

Some of the money allegedly paid to her by a fourth suspect, from the central city of Kfar Saba, who received $ 1,000 and jewelry that her niece, who was visiting Israel from Iran, had received from Rambod, according to the indictment. .

Niecen “warned [the defendant] “that the person who gave her the money and the gifts was unknown to the Jewish community in Tehran, which raised her suspicion that Rambod was working for Iranian intelligence,” prosecutors said.

Despite this, the fourth suspect remained in contact with Rambod, who indicated that he wanted a romantic relationship with her, according to the indictment.

Also, she was accused of contacting a foreign agent and transferring information that could be of value to the enemy.

The fifth suspect, a 50-year-old woman from Jerusalem who moved to Israel from Iran in 2001, gave “various pieces of information” to Namdar, Shin Bet said without elaborating. In the indictment, prosecutors said the woman gave Namdar information about Iranian emigrants living in Israel and that the two discussed the fighting in Gaza in May.

In exchange for the information she gave him, the suspect allegedly received $ 900. Throughout most of their relationship, the woman named Namdar, who claimed to be a Jewish entrepreneur living in Tehran, was an Iranian intelligence official – after asking Jewish friends of hers who still live in the Iranian capital if they knew anyone by name and was told. no – but still continued to talk to him according to the indictment.

She was charged with contacting a foreign agent.

In his statement, Shin Bet warned that Iranian intelligence was constantly seeking to recruit Israelis through the Internet to gather information about the country and to “lure” Israelis abroad to harm them. “

“We urge Israeli citizens to be aware of any attempt to make contact or irregular requests made virtually, especially with individuals who identify themselves as Iranian,” the agency said.

Last year, an Israeli man was almost tricked into traveling to the United Arab Emirates by an Iranian operator, but interrupted his trip after hearing about Iranian attempts to kidnap or otherwise harm Israeli citizens.

In 2020, Shin Bet arrested another Israeli citizen suspected of spying for Iran.